From Mid-List to Best-Seller

We’ve all heard the stories: first-time author inks multi-million-dollar contract with major publisher. Well, it does happen...except that it happens so rarely, it actually is news. Even when that does occur, the multi-million-dollar contract is usually for a multi-book deal (one advance for several books yet to be written). Of course, most news stories miss that tiny detail.

The sad reality of it is that, while better known and proven authors often pull in enough money from which to make a comfortable living, first-time authors more often than not are relegated to what publishers call Midlist, which is the rough equivalent of taking a vacation in hell in the middle of August.

Here’s the breakdown of various publisher’s categories and how newly acquired books are prioritized, from lowest to highest. 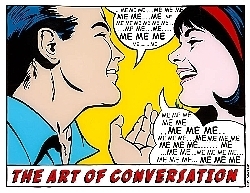 c/o gentlemansgazette.com
Reports of dialogue’s death, to misquote Mark Twain, have been greatly exaggerated. We’ve seen a swing away from effective dialogue and toward more ineffective narrative recently. Why? Because narrative is easier to write, even good narrative, than dialogue. So why dwell on the spoken word?

Because it's desirable and even necessary to most stories. Yet, setting dialogue up in the wrong way can take a devastating toll on the reader. Take this example:

"I wanted to tell him that I needed him," Mary told John's mother. "I wanted him to know that I still cared.” She had to break the news to her. “He's the father of my child." She stifled the urge to cry. "And even if I can't be with him for the rest of my life, I wanted to tell him that, for my sake and for the sake of little Max, he would always be welcomed in our home.” She paused before continuing. “But when he began running around with that other woman, when he began using drugs and staying away for days and sometimes weeks on end ..." Mary felt the anger welling within her. "I felt I had to draw the line. So I did." Read More
Be the first to comment