Write the Image, Not the Word! 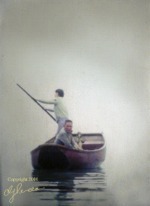 Take this to the bank: If it's a commonly accepted writing maxim, you need to challenge it. Here is one more of the most harmful "tips for better writing" I've come across in more than half a century of scratching pen across parchment. Ready?

"Write about what you know."

Which brings up a point too often left undiscussed: The art of writing isn't about putting words on paper, it's about putting images in people's minds. Images are created by a word or a combination of words that generate a mental picture of the scene, place, person, or event in the reader's head.

So, what's the difference? Check out these two similar sentences:

ONE Bob went to the corner drugstore, an old dilapidated building that had been standing forever, and was shocked to see Elaine at her usual spot behind the lunch counter, flirting with her customer and enjoying it.

TWO Bob ducked into the drugstore--its age forever scribed into its crumbling facade--and froze at the sight of Elaine's cleavage spilling out like warm milk across the time-scarred linoleum countertop; her leering customer leaned forward as he heard the whispered words: "Come on up and see me some time."

See the difference? No? Not sure? Tired of being asked so many questions in a row without pause for an answer? Try this on for size:

"Bob went" in the first example says nothing. "Bob ducked" in the second denotes a certain type of movement specific to the image that forms in one's mind. Again, in the first example: "standing forever" are mere words. In the second: "'forever scribed into its crumbling facade" creates a mental picture, or image. Still one more time: "flirting with her customer and enjoying it" creates no mental image at all (it conveys nothing beyond the bare meanings of the words). The ending of the second example, on the other hand, creates several vividly painted mental images in all your readers' minds.

You, as a writer, may have visited a drugstore lunch counter dozens of times, but if your writing merely conveys words on paper, it's going to fall flat. All the knowledge in the world of what a lunch counter looks like won't help you create that imagery in your reader's mind--unless you envision it first in yours. And vivid mental imagery is what keeps readers reading, happy, and recommending your work to everyone they know.

So, remember, write about what you "see," not about what you "know." See those mental images in your own mind before painting them for your reader to see, and you'll write your way to literary immortality before you know it.